The LEGO Movie Wiki
Register
Don't have an account?
Sign In
in: Male, Master Builders, Historical Figures,
and 2 more

William Shakespeare was an English poet, playwright, and actor, widely regarded as the greatest writer in the English language and the world's greatest dramatist and is a character and Master Builder in The LEGO Movie.

He appeared at Cloud Cuckoo Island in the gathering. He also appeared in the video game by appearing in the prologue alongside Vitruvius and Cleopatra to make the game cooperative. 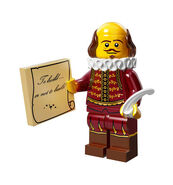 William Shakespeare as a physical minifigre.

Community content is available under CC-BY-SA unless otherwise noted.