The LEGO Movie Wiki
Register
Don't have an account?
Sign In
Advertisement
in: Heroines, Main Characters, Female,
and 8 more

Empress of the Systar System

Queen Watevra Wa'Nabi is Batman's love interest (then wife) and one of the two tritagonists (alongside Sweet Mayhem) of The LEGO Movie 2: The Second Part. She is voiced by Tiffany Haddish.

Queen Watevra Wa'Nabi makes her first physical appearance in The LEGO Movie 2: The Second Part as a pony. That meant Queen Watevra Wa'Nabi Was created by the DUPLO aliens During the events of the first film. Watevra appears like an evil tyrant, but she does her best to persuade the heroes that she is the complete opposite of a villain by singing a song about it. She manages to persuade the others by appealing to their interests (spaceships for Benny, colorful things and glitter for Unikitty, pirate stuff for Metalbeard and just appealing to Batman's ego). Wa'Nabi Is allowed to brainwash over Emmet's friends to give back all color of his home and wants Batman to marry her as his most popular way connect the Lego and DUPLO words.

Queen Watevra Wa'Nabi is a shapeshifting, brick-built alien who is the queen of the Systar System. Her servants are very loyal to her, such as Sweet Mayhem. She is the love interest of Batman, and the two get married at the end of the second film.

Her true form is a large brick-built magenta heart. It has orange and yellow bricks circling the center, which is a red square. At the very bottom, is a purple brick. She was inspired by Emmet.

She is an overall cheerful queen who wants peace between both worlds. Unfortunately, she is not the best at communicating and comes off as a very suspicious character. When the Apocalypseburg (Also known as the destructed city of Bricksburg) leaders arrive, she tries to appeal to them by offering gifts that suit their interests. After she sings the song "Not Evil", She starts to flirt a little with Batman and states that he'll be perfect for the matrimonial ceremony. Right before Wa'Nabi sings her second musical entry, General Mayhem informs her that Batman is lonely, and scared of commitmentship. She then immediately feels a connection with him.

Despite her often confident demeanor, one of the lines in her song, "And I never cry when I'm alone at night, 'cause I'm not sad, I love my life!" hints that deep down she's really just lonely and wants companionship, something which she immediately recognizes in Batman who is also very cut-off emotionally from those that he cares about.

Though she is a good person, she isn't above deception or using reverse psychology to get what she wants, as she does with Batman in order to get him to marry her. She can also be a little demanding, despite having no ill will towards anyone. Except for when she tricks Batman into loving her. 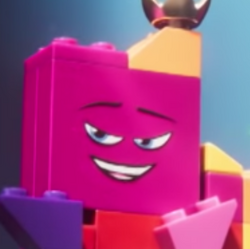