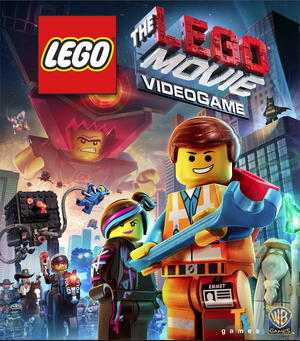 Many of the features and innovations in this game are new, such as Instruction Building and Master Building are new, though weapons that require targeting or filling up a spray bottle with water and others have been recycled from past games. Unlike most Lego games, the minifigures move like they do in the film and the world is made almost entirely out of LEGO bricks.

Emmet wearing a hard hat unlocked by playing the Bricksburg Construction level. Like most of his other variants, he has melee attacks such as punching and "jump slamming" which leaves transparent red 1x1 tiles behind. He has a drill and a wrench as tools and weapons. The drill destroys objects with ease and leaves cracks on the ground and the wrench repairs broken machinery.

The playable variant of Emmet most commonly played in story levels. He has the same weapons and tools as most other Emmet variants in the game. This variant wears the Piece of Resistance on his back with the likeness of the film version of it as opposed to the physical version (see below). The Piece is slightly tilted to make it more accurate to the film.

A variant of Emmet that resembles the physical version of Emmet with a neck bracket to attach the LEGO Piece of Resistance to his back. His tools and weapons are the same. He can be found and purchased near the Pants booth in Bricksburg for 50,000.

A variant of Emmet wearing his light-blue pajamas (or pajamas as it is referred to in the game and other tie-in media) from the beginning of the film. His tools and weapons are the same. He can be found and purchased outside Emmet's apartment for 50,000.

Emmet wearing no clothes with steam surrounding him that follows him wherever he goes. He is slightly different from the film version, due to no printing being present on his chest. He can be found in destroyed Cloud Cuckoo Land across a zipline and can be purchased for 50,000. His tools and weapons are the same.

A variant of Emmet seen very briefly in the film itself where Emmet is dressed up a surgeon. He still uses his drill and wrench. He is found near the orange rocket ship in Cloud Cuckoo Land and can be purchased for 50,000.

Another variant seen briefly in the film where Emmet dons a lizard costume (which is also seen on another minifigure. He also still uses the drill and wrench.

Emmet wearing a clown costume with makeup. This one is quite different from the film version, due to the fact that Emmet never put on makeup and he does not have pupils in his eyes. He is found in Cloud Cuckoo Land on a floating cloud island accessed by a rainbow catapult.

A variant of Emmet dressed as a woodsman. Unlike most of the Emmet variants, this one does not wield a drill and wrench, instead, he has a wooden hatchet that can be thrown like a boomerang to target multiple objects. He can be found and purchased in Cloud Cuckoo Land on a platform above the portal for 50,000.

Emmet with a trash can on his head which is seen briefly in the film but for a longer time in the game. He can be found in the alley with the world portal and purchased for 50,000. He stills wields a wrench and a drill.

A cowboy-themed variant of Emmet played as in Old West story levels. Like the woodsman variant of Emmet, he wields a weapon that matches the theme of his look, which is a gun, which can shoot and destroy objects and enemies. Like Wyldstyle and many other characters in the game, this variant of Emmet is more accurate compared to the physical version due to having hair under his hat and the Piece of Resistance still attached.

Another story variant of Emmet played as in Old West levels. This variant is seen in the film, but not for a long time. He wields the drill and wrench like other Emmet variants.

A variant played in the Put the Thing on the Thing level with tinfoil covering Emmet's face, hands, feet, and the Piece of Resistance. A unique feature to this variant is that if he is walking slowly, he will imitate the walk of a robot. His tools and weapons are the same.

A variant of Emmet that looks gradually similar to his normal variant, except that he wears no construction helmet and has the ability to master build. He is unlocked in the Back from Reality level.

A female construction worker from the film. Being a female character, she can jump high heights and climb certain walls. Like Emmet, she has a drill and a wrench for fixing or destroying objects. She is unlocked in the Bricksburg Construction level.

The construction foreman seen briefly in the film. Like Emmet and Gail, he has a wrench and a drill. He can be found near the fix-able machinery in front of the entrance to the construction site and purchased for 25,000.

A construction worker that wields dynamite which can destroy silver objects. He can be found near a pile of colorful bricks and tiles in the construction site and purchased for 50,000.

Being a main character of the film, Wyldstyle is frequently played as. She can jump high and climb certain walls. She is more accurate to her physical counterpart, which has bigger stripes on her hair, no pink inside her hood, and has a much smaller hood piece.

A variant of Wyldstyle wearing her hood and the first variation of her played as. Despite being a story character, she must be purchased. She can be found near the cheat code box in Bricksburg for 50,000. She is largely inaccurate to her film counterpart, due to a lack of designs on the side of her hood. Her abilities remain the same.

Wyldstyle wearing her Old West garments. She wields a gun that can target and shoot multiple objects and enemies. She is unlocked in Old West levels. Being a robed character, she has to hop around on her robe piece as opposed to walking.

A variant of Wyldstyle that is played as in the Put the Thing on the Thing level with tinfoil covering her face, torso, and most of her legs. Like Emmet (Robot Disguise), when walking slowly she imitates the walk of a robot. She retains the same abilities.

Wyldstyle wearing her spacesuit which was briefly seen in the film. Similar to Benny, she has spaces in between her steps which makes it look like she is in a zero-gravity environment and can hack into blue computer terminals, beginning a minigame. She wields the same laser as Benny does which can target multiple enemies and objects and destroy them.

Vitruvius has many unique abilities, such as doing a complicated "secret knock", having "blind courage", and can throw his staff into sockets. He is played as in most story levels. Due to wearing a robe piece, he must hop around on it.

A variant portraying Vitruvius after being killed by President Business. He has the ability to fly (without a string, making it slightly inaccurate to the film). He still has blind courage and can do the secret knock. Instead of a brick piece under his torso, he has white legs. He can be found in the Think Tank area of Octan Tower and purchased for 750,000.

Playable at first in the Prologue level, Young Vitruvius is not unlocked after playing the level, a code must be entered in to unlock him, which is; BC2XJ5. After entering the code, the Vitruvius (Old) icon will be flashing between the young and old variants. He can then be chosen. He has the same abilities as Old Vitruvius.

Being a main character in the film, Batman is played as in most story levels. He can use his batarang to target multiple objects and can grapple objects with his grapple gun.

Batman's identity underneath his suit. He is completely different appearance-wise but still retains the same abilities as his alias. He can be found in the hallways of Octan Tower and purchased for 50,000.

Unikitty acts as one of the several story characters in the game. She has the ability to destroy rainbow bricks and rearrange them into objects such as catapults to jump over long gaps and can shoot magical bursts out of her horn. She can also turn into Rage Kitty (see below), a form which has many unique abilities of its own. She can also target several objects to pounce onto to destroy. She walks by jumping around which leaves rainbows and butterflies behind each step.

First unlocked in the Infiltrate the Octan Tower level, Queasy Kitty retains all of her normal variant's abilities. What makes her unique is the expressions on her face, which actually makes her look seasick, whereas some of the other variants use the same expressions.

Unikitty in her business disguise with the glasses, tie, and mathematical symbols. She retains her same abilities and powers. She can be found in the hallways of Octan Tower and purchased for 150,000.

Unikitty in her spacesuit from the film. Like Benny and Wyldstyle (Space), she has long spaces in between jumps which makes it look like she is in a zero-gravity environment and can hack into blue computer terminals. She can be found next to the portal in Octan Tower and purchased for 200,000.

Angry Kitty is one of the five code-only unlockable characters. She is smaller than her rage form (see below) and can shoot fireballs which cause fair amounts of damage to enemies and objects. The code to unlock her is; 6LK78NN9 or HVLH63VL.

A form of Unikitty that can be accessed on any variant of her by holding down the "attack" button. Her head will then become larger and she gains the ability to bite and smash objects and breath fire. Whenever she moves, red objects like bats, maces, and spiders emerge from her mouth.

One of the several golden instruction builds that can be played as in the Bonus Room. She is made of the same parts as Rage Kitty, but is much larger and is made out of bigger components that aren't actual LEGO pieces. She has the same abilities as Rage Kitty. This variant is playable in the last story level of the game.

Benny is played as in several story levels. Like other space-related characters, he has spaces in between his steps to make it look like he is in a zero-gravity environment. He has a laser which can shoot and targets objects and enemies, and can hack into blue computer terminals like the space characters above.
Retrieved from "https://thelegomovie.fandom.com/wiki/The_LEGO_Movie_Video_Game?oldid=18222"
Community content is available under CC-BY-SA unless otherwise noted.