The LEGO Movie 2: The Second Part.

The LEGO Movie 2: The Second Part is a 2019 American computer-animated musical adventure/comedy film and a sequel to The LEGO Movie. It is written by Raphael Bob-Waksberg, produced by Phil Lord and Chris Miller, and directed by Mike Mitchell. The film released in theaters on February 8, 2019. After the destruction of Bricksburg, Emmet and Lucy visit the Systar System and must stop Rex Dangervest from creating an event known as Armamageddon.

The film's story picks up after the events of The LEGO Movie and begins with a scene, where Finn is told by his dad that Legos are now appropriate for his sister. Emmet and his friends sees Duplo aliens visiting Bricksburg, announcing their plan to destroy Bricksburg. Emmet builds the aliens a heart as a token of friendship, but they eat it and ask for more. Emmet, Lucy and all of the Master Builders believe this as it was nothing more than a attack in Bricksburg. All of the aliens destroy Bricksburg. After President Business leaves for golf, Emmet tries to reassure Lucy that "everything can still be awesome". Just moments after causing damage to Bricksburg, all of the Duplo aliens leave to go back home and all LEGO Justice League characters leave too. Wyldstyle notices a stairgate which allows it to shrink over the citizens of Bricksburg, including the Master Builders, making it official that according to Lucy, "it wasn't awesome".

The only exception is Emmet, who is still upbeat and optimistic. When Lucy attempts to teach him how to brood, Emmet reveals a visionary nightmare of an impending "armamageddon". Afterwards, Emmet takes Lucy to surprise her with a new, cute house he built for the two of them. However, Lucy warns him that such a cute house will attract more aliens. Immediately after they see a shooting star, which turns out be a Metal DUPLO spaceship. Emmet, Lucy and Unikitty rush through into the abandoned Bricksburg to see what's going on. At the back of the Bricksburg sign, the three of them discover a blue-eyed spaceship, which destroys the Bricksburg sign and follows after them, Emmet, Wyldstyle, and Unikitty escape the ruins of Bricksburg.

The blue-eyed spaceship attacks Apocalypseburg, and everyone takes shelter behind a big gate. However, one of the exploding stars becomes stuck in the gate right before they close, prompting Emmet to briefly open them to rescue the star. As he does, the ship's commander sneaks into the shelter. The commander turns out to be General Sweet Mayhem, who invites the leaders of Apocalypseburg to a matrimonial ceremony in her home galaxy at 5:15. When they refuse, Sweet Mayhem captures everyone, except Emmet and takes them away. Emmet tries to provide a sound reason for the Master Builders to do something to save Lucy and the rest of his friends, but they refuse to help. So Emmet rebuilds his cute house into a rocketship to pursue Mayhem, Lucy, Benny, Batman, MetalBeard and Unikitty, all of whom end up in a castle owned by the shape-shifting queen of the "Systar System", Queen Watevra Wa'Nabi. Wa'Nabi is able to brainwash Emmet's friends into accepting the happiness of her colorful universe, demanding Batman to marry her as his very own way to unite the Lego and Duplo worlds. Only Lucy remains skeptical of Wa'Nabi's plan and Mayhem takes Lucy to Planet Sparkles, where Balthazar takes her to a spa, which reveals Lucy's real hair color, Neon Blue and Fuchsia.

Emmet passes through the stairgate and runs into Asteroids and nearly collides with one, but is saved in time by rugged adventurer Rex Dangervest. After hearing Emmet's story, Rex offers to help and takes him to the Systar System. Emmet and Rex go to Harmony Town in order to see the characters that are now in the Systar System, but they flee after being chased by them. After escaping from the DUPLO brickyard, Emmet quickly reunites with Lucy and they discover a plan of Armamageddon. As the wedding starts, Emmet, Rex, and Lucy divide into groups to somehow carefully obstruct the event. However, Lucy is pushed away by Mayhem, who says that the wedding prevents Armamageddon. At the ceremony, Wa'Nabi accepts her true form: the heart that Emmett tried to use for the Duplo invaders. Realizing that Rex is the villain, Lucy tries to stop Emmet, but with prompting from Rex, Emmett destroys the space temple. In the real world, Finn, after finding that his little sister Bianca had stolen his Lego figures, has taken her creations.

Emmet tries to save Lucy but is taken by Rex, who reveals he is a version of Emmett from the future; Rex experienced the same events: This happened because Emmet crashed into the asteroid right before Rex swooped in to save him, but Rex didn't exist yet. So, he had crashed and fallen into planet Undar of the Dryar System, under the dryer in the human world, forgotten by his friends and Finn, where he had been alone for years with no one coming to save him. This loneliness and angriness Is what caused him to eventually gain control of his own body. He changed his clothes, name, and he became Rex Dangervest. Building the Rexcelsior, Rex goes back in time to follow a group of velociraptors and he creates a time machine before traveling back to the present to save Emmett from the asteroid. Meanwhile, at the same time, Rex manages to save himself from going through that anguish. Believing that Rex has plans for Armamageddon, as in "our mama gets in", Emmet discovers that Finn, angered, smashes Bianca's creations, causing Bianca to argue with him. Their mother walks in during their fight and, because she had to step in over the years since the first film, and now, fed up with their fighting, tells them that enough is enough. Their mom forces the two of them to throw all their Legos into the Storage Bin as punishment for their arguments. This is the true Armamageddon. Back in the Rexcelsior, Emmet refuses to abandon his friends, but Rex throws Emmet under the same dryer he ended up in, and he continues to exist. In the Lego universe, the world breaks and crumbles apart and all the characters get sucked into the Bin of Storaji. Lucy ends up in the storage bin with the other characters.

After Lucy and the other LEGO characters sing a sad version of Everything is Awesome and gets Finn's attention, Finn and Bianca decide to play together. In the Lego universe, Lucy rallies the others to help her escape the Storage Bin. Lucy Rescues Emmett from Rex and destroys his time machine. When Rex realizes that Lucy came back for Emmett, like no one had ever done for him, he seems to reconcile with his grief and then starts fading away. Emmett wants to save him, but Rex says that it's okay and fades from existence. it is an unknown what happened to Rex after Lucy rescued Emmet.

Finn and Bianca's mother sees them playing together and calms down, presumably returning their toys. Apocalypseburg and the Systar System are merged to create Syspocalypstar. Benny switches helmets with Mayhem. President Business returns from golf, telling Emmett that he did a good job fixing everything until Benny flies by him, causing him to get fire on his head. After running into a firework shop, President Business is ejected from the universe by fireworks and hurled out of view. Lucy rebuilds Emmett's home and they move in.

Lucy gifts Emmett with the original album of "Everything is Awesome", revealing that she co-originated the song. Emmett and Unikitty gasp in shock, ending the film.

In the film, Vitruvius‘ Ghost and Bad Cop/Good Cop do not have any lines, though they can be seen making cameos.

The LEGO Movie 2: The Second Part/Credits 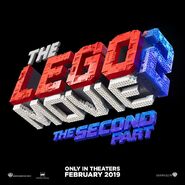