The LEGO Batman Movie is a spinoff of The LEGO Movie released on February 10, 2017.

At the beginning of the movie, Batman is fighting an army of villains lead by The Joker who threatens to blow up Gotham City. Batman is able to stop them but destroys his relationship with Joker by saying that "There is no us" and "I don't do (relation)ships". Joker is determined to prove that he is Batman's worst enemy, and while watching a news report on The Phantom Zone and hearing that it contains Daleks, King Kong, and other villains, decides to surrender himself. At the resignation gala of Commissioner Gordon, Barbara Gordon takes over as Commissioner. Batman, now acting as his secret identity Bruce Wayne sees Barbara and falls in love. An orphan named Dick Grayson starts talking to Bruce, who is distracted, and Bruce unintentionally adopts him. Suddenly, Joker attacks, but surrenders, putting his master plan into play. Joker and all of his minions are put in Arkham Asylum.

Spoiler alert in these points. 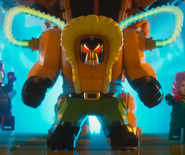 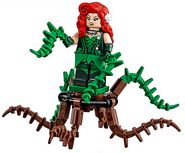