The LEGO Movie Wiki
Register
Don't have an account?
Sign In
Advertisement
in: Robo SWAT, Bosses, Antagonists,
and 6 more

Jorma Taccone
Sheriff Not-A-Robot is a minor antagonist in The LEGO Movie. He is voiced by Jorma Taccone who also voices William Shakespeare.

At some point in his life, he became the sheriff, of Flatbush Gulch, possibly with the help of Bad Cop/Good Cop. When he asked him if he had seen Emmet Brickowski, he soon hunted him down. He, Wiley Fusebot and several other men chased them on horses, but Emmet on his cart took a swift turn, and all of them fell off the cliff. As he was falling, the Sheriff shouted 'Dagnabbit!' and, along with the other robots participating in the chase, were caught in a large explosion. 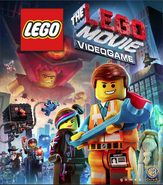