The LEGO Movie Wiki
Register
Don't have an account?
Sign In
Advertisement
in: Candidates for deletion, Presidents, Antagonists,
and 18 more

President of Bricksburg and the rest of the world (formerly)

President Business (also known as Lord Business), is one of the two main antagonists (alongside The Man Upstairs) of Warner Animation Group’s 1st full-length animated feature film The LEGO Movie, and a minor character in its 2019 sequel The LEGO Movie 2: The Second Part.

He was the villainous and cruel president/overlord who wanted to destroy the LEGO world by gluing it together with the powerful superweapon known as the "Kragle".

He is voiced by Will Ferrell, who also played Jacobim Mugatu in the Zoolander franchise, Megamind in DreamWorks' Megamind, and The Man Upstairs (his human counterpart and the other main antagonist of The LEGO Movie).

Lord Business is fixated on being in control, and cannot stand anything that even slightly deviates from his idea of perfection. He created walls between each section of the LEGO world to keep all the pieces in what he believed to be their rightful places and prevent them from mingling with each other in any way not allowed by his "instructions". However, he eventually found that unsatisfactory and developed a plan to use the "Kragle" (actually Krazy Glue) to forever seal every piece in place, creating a "perfect" but immobile world.

Since he publicly poses as President Business, most inhabitants of the land of LEGO have no idea he is evil. He is able to run the world competently and efficiently, though underneath the bright and cheery surface lies a dystopia wherein those who refuse to follow President Business' "instructions" are at risk of being captured by his Super Secret Police Dropship and executed.

It is later revealed that a boy named Finn based Lord Business off of his strict father, who had a hobby of collecting LEGO, but refused to allow his son to play with them. However, Finn's father and Lord Business both had a change of heart by the end of the movie. The father realized that his obsession was alienating him from his son, who told him that anybody can be special in their own different way and that the fun of LEGO is not just to assemble it as instructed, but to use it to create something new. Emmet also tells this to Lord Business, making him have a change of heart and cure everyone of the Kragle using water. After that, he reformed and became a president again.

After the Taco Tuesday events, the Duplo Aliens visit the LEGO world, announcing their intentions to destroy it and all of their inhabitants. Emmet tries to befriend the Duplo Aliens, but his attempts at friendship end with himself, Wyldstyle, and their friends fighting the Duplo Aliens. In the midst of the chaos, Business unhelpfully tells everyone to get along before he dons a golfer outfit and leaves to go golfing leaving the others in charge of the problem. Five years later, after the defeat of Rex Dangervest and the unity of Apocalypseburg and the Systar System, Business returns to the new city telling Emmet and Lucy saying that he missed a gimmie putt for birdie on seven and that they managed to restore everything to normal. He's last seen when his hair gets on fire by Benny as he flies by and ends up running into a shop which is a firework's shop that explodes.

Lord Business was a downright tyrant and perfectionist. He was portrayed as a stereotypical and evil ruler, a cruel man who needs everything his way. Business was completely strict, arrogant, treacherous, ruthless and above all, evil. Like many tyrants, Business desired absolute order in his domain; he divided worlds so there would be no confusion, and then ruthlessly hunted down the Master Builders. So far, the only person that he showed any respect to is his lieutenant Bad Cop; however, he was still equally pitiless and unemotional to him as well as his enemies, having removed his Good Cop persona and then forced him to freeze his parents with the Kragle. He later threatened to kill Bad Cop.

His public figure was a friendly public official, but he was (in reality) an extremely manipulative and villainous mastermind. In many ways, Business acts as a shepherd to his mindless sheep, he actually admitted live on air that he planned to put everyone to sleep if they didn't follow his rules, only to cover it up with Taco Tuesday and then made them forget it by airing everyone's favorite show "Where Are My Pants?". He also uses the song "Eveything is Awesome" to brainwash the citizens.

Prior his transformation to good, Business was a quarrelsome sadist; he made Bad Cop Kragle his own parents, laughed in a maniacal, incoherent, and unreasonable fashion just after decapitating Virtruvius, mocked a captured Emmet by saying he wasn't special and then forced the captured Master Builders to watch as he Kragle'd his hometown. However, despite this, the source of all his villainy was due to never being called special making him a somewhat compassionate and sympathetic character.

After turning good, President Business shows a possibly cowardly side. When the Duplo Aliens attack, he abandons the conflict for five years, and doesn't return until after everything has blown over.

It is revealed that Business was modeled after his creator, Finn's father, who was very strict, obstinate, and contumacious, as he would glue all of his Lego creations together, so they would always stay the same. However, after hearing the same speech that Wyldstyle gave Emmet, he had a change of heart, destroyed the Kragle, and unfroze all of his victims. Finn's father allowed him to play freely with his Lego sets as well as his sister.

As President Business, he wears a gray business suit, a white shirt, and a red necktie. As Lord Business, he wears a set of sinister-looking armor over it. The breastplate of the armor is black and engraved with a necktie-like ornament. He wears a massive horned headgear, of which the horns spit fire, and has extendable mechanical stilts on his legs, which he uses to appear taller. His face resembles that of his voice actor Will Ferrell.

Lord Business is a villainous mastermind who uses an arsenal of high technology to rule the world. He leads an army of robots armed with laser weaponry. His most advanced minions are the powerful mechanical Micro Managers, built specifically to arrange every piece into its "perfect" position in order to prime them for the Kragle. He also has a henchman named Bad Cop that does whatever he commands. He can also make flames come out of his helmet, which is only seen twice in the film.

He also has access to several "artifacts" from the human realm, most notable of which is the "Kragle" (a bottle of Krazy Glue) which fuels his ultimate super-weapon and is the linchpin of his entire plan. Other "artifacts" he uses include the "Cloak of Band-Ai'ed" (a dirty Band-Aid), "Sword of Exact Zero" (an X-Acto razor blade), "The Fleece Crested Scepter of Q-Teep" (a Q-tip) used to apply "The Po'lish Remover of Nai'eel" (nail polish remover), "The Orb of Ti'etleist" (a Titleist 1 golf ball), and a penny (unnamed) which he uses as a thrown weapon to decapitate Vitruvius.

Lord Business makes his home/headquarters in an impossibly high tower, protected (among other things) by "lasers, sharks, and laser sharks". This is also where he has his "Think Tank", an assembly of subjugated Master Builders forced to come up with ideas for him.

Really? So it's like a bunk-bed couch? Is that what it's like? That's weird. If you're sitting in the top middle how are you gonna get down without climbing over someone? If you're sitting on the bottom and you're watching TV are you gonna have to watch through a bunch of dangling legs? Who's gonna want to sit on the bottom? It is literally the MOST USELESS idea I've ever heard.

"All I'm asking for is TOTAL PERFECTION!"

-Lord Business to Bad Cop, when he attempts to test the Kragle on the latter's parents.

-Lord Business to the citizens of Bricksburg on Taco Tuesday.

Portrayal in the Sets

President Business appears in three sets; one as a collectible minifigure (The LEGO Movie Collectible Minifigure Series), and one as Lord Business (Lord Business' Evil Lair). 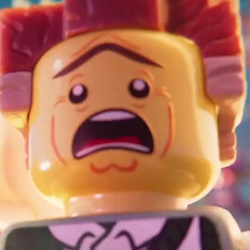 This page is a candidate for deletion. If you disagree with its deletion, please explain why at Category talk:Candidates for deletion or improve the page and remove the {{delete}} tag.

Remember to check what links here and the page history before deleting.