The LEGO Movie Wiki
Register
Don't have an account?
Sign In
Advertisement
in: Background Characters, Characters, Male,
and 5 more

Larry the Barista is one of the characters in the 2014 film, The LEGO Movie and its 2019 sequel The LEGO Movie 2: The Second Part. He is voiced by Chris McKay.

Larry the Barista works at The Coffee Chain in Bricksburg. He is famous for making the most average and expensive coffee in the city. Like many of the citizens of Bricksburg, he is very uncreative and does everything by the instructions. He finds his creativity after Wyldstyle's speech and builds a machine out of his coffee shop to attack the Micro Managers. 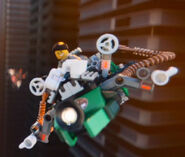