The LEGO Movie Wiki
Register
Don't have an account?
Sign In
Advertisement
in: Cleanup, Article stubs, Characters,
and 10 more

Sweet Mayhem is the secondary tritagonist of The LEGO Movie 2. She is voiced by Stephanie Beatriz.

Sweet Mayhem wears an all-white suit of armor with magenta and turquoise highlights. She has fluffy blue hair with long pigtails and a half-magenta, half-turquoise eye color. She has pink skin with white freckles. Alongside that, she has a set of wings that glow.

This article is a stub. You can help The LEGO Movie Wiki by expanding it. 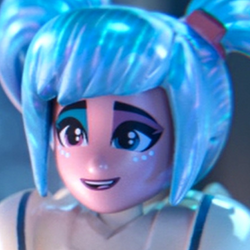