Denny .is a minor character in The LEGO Movie. He is a red spaceman based off the original red spaceman, who was a common minifigure in classic LEGO space.

He makes brief cameos in The LEGO Movie but is not named and does not have any lines. He appears as a unlockable character in The LEGO Movie 2 Videogame, despite not appearing in the film itself. It is here that he is first given the name Denny. His name rhymes with the other members of the "space squad" (Benny, Jenny, Lenny, and Kenny). 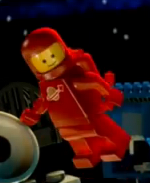